Families come out to Claremont Yoga Inside Tracy Brennan’s new Claremont Yoga studio, located at 300 West Foothill Boulevard, parents and children have shown up over the last six weeks to not only beat the summer heat, but also to partake in fun and refreshing yoga activities inside her new space.

And, for the last three Wednesdays—beginning on June 23 and ending on July 7—owner and instructor Ms. Brennan has been hosting a new summer series called Kids Yoga and Art with the help of some of her closest friends. The youth series is one of the first in person classes the studio has introduced since reopening in May.

“It’s more of a fun movement class to build and help develop coordination and give the kids confidence and strength. And mostly to have fun,” Ms. Brennan said. “And then after the movement portion, we do a focused art project.”

While it’s obvious that after owning Claremont Yoga for the last 11 years, Ms. Brennan is no stranger to hosting yoga classes, and she’s hosted children’s yoga lessons for the last seven years. But art activities? According to Ms. Brennan, she started this event so that children can have fun and freedom to do their yoga movements during the first hour while also letting their creative imaginations run wild for the second.

“It’s from five years old up to like 10, so it’s a diverse group of kids,” Ms. Brennan said. “We all have been struggling with the Zoom classes, even though it’s kept us connected over the last year and a half. Being together, I think kids love the energy, laughing and seeing each other and being with instructors that can see them up close.”

At about 1:15 p.m., a handful of parents showed up to drop off their children who participated in the yoga and art hybrid class. Elizabeth Webb, an instructor at Claremont Yoga, hosted the yoga portion of the session, while Jac Tardie, a new instructor at Carden Arbor View School in Upland, led the art activities.

For one hour, six children circled around Ms. Webb inside the quaint yoga studio as she read them the children’s book, “Every Little Thing.” The book is based on the Bob Marley song, “Three Little Birds.” While she read, she incorporated various exercises the children could participate in including the lion’s breath, the sun dance, warrior pose, the flamingo and other signature poses. She also taught the students how to balance themselves on their shoulders using the wall before ending the session with a dance party.

“I put numbers in there [the lesson] and different languages or [I] just teach them parts of their body,” Ms. Webb said. “I try to just incorporate whatever we’re learning in the posing or the story or the theme of the day.”

When asked about the importance of yoga, Ms. Webb replied that, “it’s a way to kind of come home to yourself and check in to see how you’re doing.”

After an hour of yoga, the kids moved over to the other side of the studio for Ms. Tardie’s art class. Poured out on the art mat were spices like cinnamon and turmeric along with flour and Vaseline. Ms. Tardie showed the students that by covering their fingers with Vaseline and then painting with them on the construction paper, it would leave a sticky trail behind on the paper.

After drawing or writing their names, the students used the spices to cover the Vaselined paper before quickly shaking it all off. The goal is to have the colored powder stick to the Vaseline, mimicking the drawing technique cavemen used.

Knowing that children are prone to getting dirty, especially during an activity such as cave painting, Ms. Tardie came prepared with paper towels and wipes. She also brought markers to use instead in case some children, like five-year-old Izzy Friedman, did not want to get dirty.

Talking about how different this art lesson was from one of her own classes, Ms. Tardie replied, “It’s really not. I would say it’s really similar. I like [that] the kids to be able to move around and have fun, I think that’s part of it.” She also added that art is a great way for children and adults to express themselves in nonverbal ways. She said that, “It [art] is a very introspective process where you get to learn a lot about yourself.”

After struggling financially due to COVID-19 and being forced to close her old studio’s doors in March 2020, Ms. Brennan showed her resilience and began saving up for a comeback shortly after. She continued her Claremont Yoga business online by hosting Zoom classes and taking donations from the community so she could open a new studio. In addition to her own money, donations and a Paycheck Protection Program loan, she was able to afford a new building off Foothill Boulevard in early 2021.
“We have a new location and it’s even more beautiful and peaceful [than the last location],” Ms. Brennan said. “People are just so happy to see each other and be able to smile and hug—you know with permission of course until everyone feels comfortable.”

The COURIER attended the last class for July, and Ms. Brennan said that the series will return in August. For more information on Claremont Yoga and their events, visit their website at www.claremontyoga.com. You can also email them at claremontyoga1@gmail.com or call Ms. Brennan at (909) 563-0714. 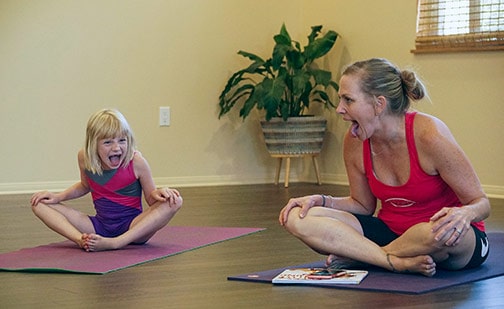