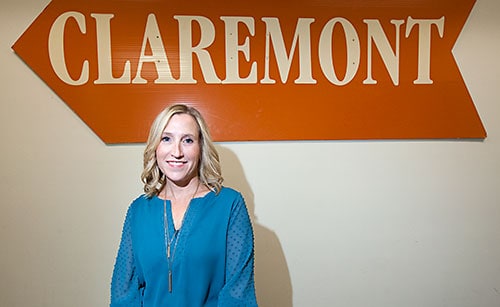 The Claremont Community Foundation (CCF), a philanthropic group that provides grants to local arts, education and social programs, has a new leader.

Aurelia Brogan, formerly the arts coordinator for the city of Claremont, began her job as the foundation’s executive director in July. She said CCF had been without a director for some time, and sees the start of her tenure as a “good time to hit refresh.”

“Right now we’re in ‘let’s catch up a little bit’ mode,” Ms. Brogan said. She said the foundation, established in 1989, used to be squarely focused on giving to the arts, but has strayed from that purpose over time. Ms. Brogan wants to go back to the organization’s roots.

“I think there’s so much opportunity here and so much room for growth,” Ms. Brogan said.

The foundation accepts donations big and small from Claremont individuals, businesses and groups, and parcels out more than $15,000 each year to organizations like the Claremont Museum of Art, the Foothill Family Shelter and Shoes That Fit. Grant applications are due November 2.

The foundation hosts monthly public art shows and other events several times a year, but Ms. Brogan plans to make the group even more visible in the community.

“I’m going to use that marketing background, hopefully, to really get the word out there,” she said. For instance, Ms. Brogan said, the foundation is redesigning its website and putting a donation box at its art shows.

She also wants to reach out to “the next generation of families,” since she thinks younger Claremont residents could be eager donors to the arts.

“One thing that’s important to me is just making sure that our giving process is easier than it’s ever been,” she said.