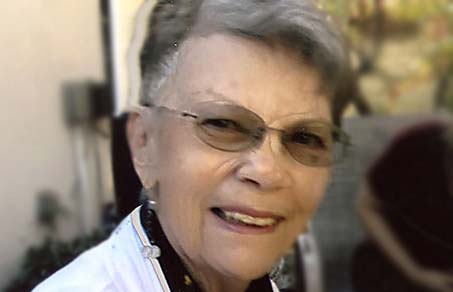 Born during the Depression in rural Texas, she lived through the howling windstorms of the Dust Bowl era. In her teen years she moved with her father and paternal grandmother to Lubbock,  Texas.

Some of her fondest childhood memories were visiting her mother’s family on the farm and listening to her grandfather play the fiddle, while her uncles played along. Those days spent with this boisterous family became the subject of many of her paintings.

Katie attended Texas Tech University, where she met her future husband, Bill Selke. After earning her bachelor’s degree in childhood education, she accepted a teaching position in the Bay Area. That August she packed one suitcase, took the train from Lubbock to Oakland, and married Bill, who was stationed at the Naval Support Center in Alameda.

The couple then moved with their first daughter, Kathy, to Southern California, and soon the family grew to include two more daughters, Stacy and Alia.

The arts were always very important to her, and while raising three daughters she began work on a master of fine arts degree at the Claremont Graduate School, now known as Claremont Graduate University. She studied painting with Alan Blizzard and later remarked that her graduate school education was the first time she looked forward to classwork. Ms. Selke became an accomplished and prolific artist, experimenting with many different mediums, but her true love was always painting.

After completing her MFA, she taught art part-time at local community colleges, as well as Claremont Graduate University, in the teacher credentialing program. After that she began a full time job as a multi-arts teacher for the Ontario-Montclair School District. She loved to see the students create art and became a proponent of the value of art in the school curriculum.

Early on, she enjoyed studying creative and modern dance with Darth Ivans and in this group she met many lifelong friends. During this period she also taught creative dance and art to children in the surrounding communities.

When they were young parents raising three girls, their family joined the Unitarian Church in Montclair. There they made lifelong friends and enjoyed sharing family activities like travel, camping, and white-water rafting.

Later in life, she joined the Quaker “Friends” community in Claremont. The Friends community was very important to her, and she was well loved there. She enjoyed working with the children on art projects, organizing art shows, and creating flower arrangements for Sunday meeting. Her spirit was also nourished by joining a local meditation group, studying the works of psychologist Carl Jung, and writing poetry.

One of her joys in life was being a member of the art collective, the Gypsy Sisters. She loved working with artist friends and sharing her work. Not a show went by without her bringing home a new piece of art to add to her collection.

“She leaves behind a legacy of love for family and the joy of creative expression,” her family shared. “She will be missed by those who loved her.”

A memorial service will be held at 4 p.m. Sunday, October 27 at the Claremont Friends Meeting House, 727 Harrison Ave., Claremont.

In lieu of flowers, donations may be made in Ms. Selke’s memory to Claremont Friends Meeting, 727 Harrison Ave., Claremont CA, 91711.