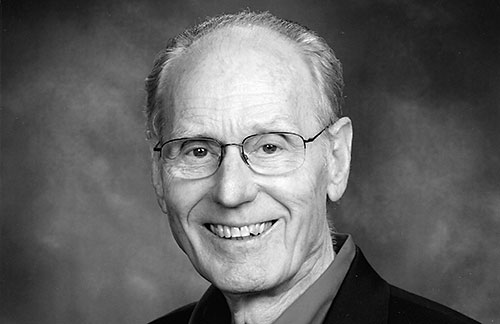 He and his family first migrated from Alabama to Texas before settling in Southern California, primarily in Claremont. He was a devoted husband to Janet Jordan (also of Birmingham) for 58 years until her death in 2013. They had two sons, Paul and David, who attended Claremont public schools.

The first in his family to attend college, Mr. Tate graduated from Birmingham Southern College where he earned a bachelor’s degree, later completing a master’s in music education at Southern Methodist University in Dallas, Texas.

Between Birmingham Southern and Southern Methodist, Mr. Tate served as a high school music teacher in Sylacauga, Alabama. Thereafter, he taught choral music at a high school in San Jose, at the Claremont Colleges, and in the Cucamonga School District before serving as vice principal and principal at several schools there.

After retiring in 1987, Mr. Tate worked part time supervising student teachers, a position that allowed time for him and Mrs. Tate to make trips to Britain, France, Germany, Spain, China and Russia.

Mr. Tate was active as a tenor soloist. He performed with the Claremont United Methodist Church and Pilgrim Congregational Church choirs, as well as in the Claremont Colleges’ production of Beethoven’s “Mass in C.” The Tates also both enjoyed singing with seminar participants at the Classical Music Festival in Eisenstadt, Austria.

Mr. Tate played basketball in high school and college, was interested in sports and enjoyed the outdoors, especially when fishing. He played tennis and golf, enjoyed camping and traveling throughout the United States with his family.

A few years after Mrs. Tate died, Mr. Tate slowly developed a relationship with Paula Hui, a friend in his church choir. Together they thoroughly enjoyed watching sports and attending concerts and plays. As he endured his physical decline, Ms. Hui faithfully helped in every way she could.

“Quietly unpretentious in manner, stable and unshakable, Mr. Tate was known for his insight, good sense, and self-control,” a close friend shared. “He rarely lost his temper, and was always ready to help.”

Mr. Tate suffered from Myelodysplastic Syndrome, a bone disease which is sometimes a precursor to leukemia. He was preceded in death by his wife, Janet; sister, Betty Jean Gilmer; and eldest great-grandchild, Sawyer Jacobson.

He is remembered with love by his sons and daughters-in-law, Paul and Barbara Tate of Wright City, Missouri, and David and Tammy Tate of Menifee, California; grandchildren Cheryl (Tate) Hatch (of Illinois), Lora (Tate) Jacobson, John Paul Tate III and Gorden Tate; and great-grandchildren Lance and Erik Jacobson, and William, Kalina, Joshua and Rebecca Tate, all of Missouri.

A memorial service is scheduled for 3 p.m. Wednesday, June 19 in the sanctuary of Claremont United Methodist Church, 211 W. Foothill Blvd.